INFLATION IS BECOMING A WORLDWIDE PHENOMENON

And it is getting worse as the U.S. and
European economies slip into recession
by Monty Guild
Guild Investment Management, Inc.

Microsoft and NBC want you to know that there is a Real ID card in your future, as this segment that aired on the Today show demonstrates.
Earlier this week, we learned that Microsoft filed a patent “for a system to monitor the health and mental state of computer users,” a system designed to “automatically detect frustration or stress in the user via physiological and environmental sensors, and offer or provide some assistance accordingly,” sort of the way the “instructress” in Orwell’s 1984 offered “6079 Smith W” assistance via the telescreen. NBC, owned by death merchant General Electric, also has a vested interest in Real ID, as they are, as a Pentagon “defense” contrator, in the business of “domestic intelligence gathering,” primarily through the Pentagon’s Counterintelligence Field Activity unit. Last August, we were assured by Def Sec. and former spook Gates that the Pentagon would shut down its controversial domestic spying database known as TALON. Sure. And I have a bridge for sale on Ganymede.

So unpopular is the Real ID scheme with the plebs, Michael Chertoff has lately taken to vigorously pimping the plan. Chertoff tells us Real ID is a fantastic idea because it will “prevent somebody from evading a watchlist and getting on an airplane and blowing the plane up because they pretend to be somebody else,” never mind how unlikely this is, even with dim-bulb patsies such as Richard Reid, the infamous “shoe bomber,” wandering around, waiting for orders from headquarters.
But if you actually believe al-Qaeda is lurking in the shadows with shoe and liquid bombs, you might take comfort in the fact the Ministry of Homeland Security will phase its scheme in over the next few years, regardless of what most people want. As for those handful of states that have declared their unwillingness to participate, their residents will no longer be allowed to get on airplanes or possibly travel by car to other states. In order to do so, they will need a passport — you know, the new passports with RFID chips embedded.

It would seem the only way to avoid this nightmare would be for those states opposed to secede from the United States.

The Presidential candidate indicated that the full truth was still not known “because ineptness was hidden” in the 9/11 Commission investigation.

“This is generally what government investigations do,” Ron Paul said. “They hide inefficiencies and ineptness.”

He further criticized those in charge who “can’t and won’t admit” that the country is “fighting a war for no good reason.” “They’ve dug their heels in and they’ll lose everything they’ve said,” he said about war hawks.

White four engine plane with no ID markings;landing at Castle air base in Atwater Calif.;video taped in Merced Calif. 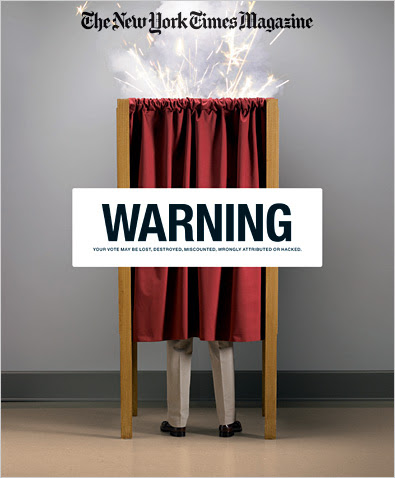 The entire debate over e-voting may well be just about to change. Hopefully for the better. Big time.

One key passage: “The earliest critiques of digital voting booths came from the fringe — disgruntled citizens and scared-senseless computer geeks — but the fears have now risen to the highest levels of government.”

Editor & Publisher’s editor Greg Mitchell, has tipped off The BRAD BLOG late this afternoon, that the New York Times Magazine is set to run a “massive” cover-story this Sunday, on the entire e-voting disaster titled “The Bugs in the Machines.”

Better late than never?
Mitchell describes the story as “quite chilling” in the exclusive preview he’s just posted to his new personal blog. Here’s the first coupla grafs from his scoop…

Coming between the Iowa and New Hampshire tallies, this Sunday’s cover of The New York Times Magazine ought to strike a chord. It shows a man inside an exploding voting booth with a WARNING label over it and the words: “Your vote may be lost, destroyed, miscounted, wrongly attributed or hacked.”The massive Clive Thompson article, titled “The Bugs in the Machines,” is quite chilling. “After the 2000 election,” it opens, “counties around the country rushed to buy new computerized voting machines. But it turns out that these machines may cause problems worse than hanging chads. Is America ready for another contested election?” One key passage: “The earliest critiques of digital voting booths came from the fringe — disgruntled citizens and scared-senseless computer geeks — but the fears have now risen to the highest levels of government.”One expert says that “about 10 percent” of the devices fail in each election.
Read more »
Posted by Roger Cooper at 8:01 PM 0 comments


The Great Seal of the United States can be easily viewed on the back of a one-dollar bill. Although the colors mentioned in this article won’t be visible, it is still an easily obtained reference point for your convenience. The OBVERSE is on the right side (the eagle), while the REVERSE is on the left side (the pyramid) of the instrument.
Man is an enigmatic creature having a dual nature, temporal and spiritual. His institutions reflect the multiple facets of his complex and varied mental processes. He is at once occupied with the routine of satisfying the basic human needs for food, clothing, and shelter and the less tangible and more varied spiritual and social needs. His viewpoints are as varied as the individuals, subject not only to the external changes of environment but to self- created internal changes. Man alone has within himself any considerable power of thought or imagination. One facet of man’s behavior to come out of his imagination, superstition, spiritual groping, and reasoning is symbolism.

Geo Engineering : This video is a must see if you have any questions about Geo Engineering. The research is extensive and in-depth. I am still dismayed over the lack of questioning and open mindedness around the subject. So I hope you have some time to watch all 7 episodes and start taking notice.

Ralph Nader: "Things Are a Lot Worse than We Thought!"

Ralph Nader: “Things Are a Lot Worse than We Thought!”

What are Contrails?
Streaks of condensed water vapor created in the air by jet airplanes at high altitudes. (Merriam-Websters)
Streamer of cloud sometimes observed behind an airplane flying in clear, cold, humid air. (Encyclopaedia Britannica)
A visible cloud streak, usually brilliantly white in color, which trails behind a missile or other vehicle in flight under certain conditions. (DOD Dictionary of Military Terms)
Contrails can exist in two forms: water droplet and ice crystal.
Under what conditions do Contrails form?
The primary factors in contrail formation are air temperature and moisture content. They are usually seen at the higher colder altidtudes, but will even occur at ground level in Antartica, sometimes causing a visibility problem for jets that take too long to take-off. Contrails started becoming a common sight during World War II, when bombers started flying at altitudes above 30,000 feet. They can exist in two forms: water and ice. A water droplet contrail occurs when an airplane flies though cold and supersaturated moist air and the warm water vapour produced by the engine condenses into tiny droplets. Under colder temperatures the water will freeze creating suspended ice-crystals.
The following graph represents contrail data collected for Houston, TX over several months. See the Trail Research Report for full details.

Temperature and Humidity (degrees of separation between Dew Point and Temperature).